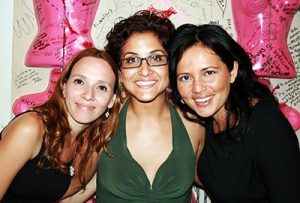 Itinerant exhibition that arises from the encounter of three artists, who imprint on the term "flight" the meanings of liberating and freeing, imaginar and imagining, build and rebuilding, commit and committing, risk and risking, all with a common thread: the knowledge of themselves, of their physical, moral and social reality.

Daría González allied with Argentine painters Jimena Odetti and María Cristina Mercado in this artistic proposal in a search for common destinies within art and within their lives, as human beings committed to the transformation of society.

The first exhibition was held in November 2008, at the Aguafuerte Gallery, at Colonia Roma in Mexico City. Later the exhibition was presented at the Universidad Tec Milenio (Tecnológico de Monterrey) in January 2009.  And in the spring of that same year the exhibition was shown at Cathy Von Rohr Art Studio Gallery, Puerto Vallarta, and at the annual Golf Tournament of the American School at the El Tigre Golf Club, in Nuevo Vallarta, Nayarit.